Posted on February 3, 2011 by foxpudding 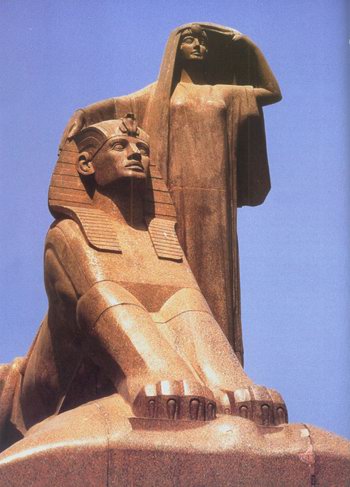 When I was a very young man I visited the Egyptian Museum in Cairo. It is easy to find, part of the grand location that is the Midan Tahrir, the most modern of Cairo’s public squares and certainly the most central to Egypt’s modern personality.  I mean, you got your Hilton, you got your American University, and the museum is right there to store Tutankhamen’s treasures for us until the folks in New York City need to see them again. Very handy, it all is.

The museum in those days was a lot more impressive from the outside than it was inside. This was not because the treasures inside weren’t amazing, but simply because they were mostly left to look out for themselves.  No set designer had got in the middle of things to jazz it up and lend it pop; ordinary long glass cases and simple typed signs were used to display small objects.  I recall lots of windows and sunlight but little artificial lighting.  It felt a lot like being in a large municipal building in America’s Deep South with clackety floors and many rooms, the air warm and thick with the scent of strong wood.  When you looked at King Tut’s stuff and saw all the gold you just thought, huh, well that’s a lot of gold, sure enough.  Gold is actually kind of boring when you get around a lot of it.

You may not have heard this about gold, but turns out it is just metal.

I got the oddest feeling from the guards at the museum that they were kind of embarrassed by the whole thing. Most of the great tombs were robbed long before archaeologists got to them, and I think that while Egyptians are certainly proud of their treasures, they are also a little disappointed that they let such a big one get away. It’s like they are ashamed of having such inefficient grave robbers.  It’s a very American sort of feeling. We have such a fondness for rascals ourselves we’ve made near cults for the Jesse James types, for the Bonnie and Clydes. We made a hero out of the Godfather, for crying out loud. There is just something in our character that loves a duplicitous, murdering bastard.

But that’s beside the point. With all the grandeur of Egypt’s past at my fingertips, none of it impressed me as much as this sculpture which I saw later.  It stands at the gate of Cairo University in Giza and was sculpted by the great Egyptian artist Mahmud Mukhtar between 1919 and 1928, roughly.  I have seen it called Egypt Awakening in most places, but in the picture at Wikipedia Commons it is called Egypt’s Renaissance. Mukhtar was a very forward thinking man for his time. His statue shows not merely an Egypt that embraces its incredible cultural heritage, but one which is ready to march forward into the modern world free with its head held high. His woman is liberating herself from the veil, announcing herself a partner in the world even as she rests an affectionate arm on a heritage that reaches to Cleopatra and beyond. His was a dangerous and heretical stance. There are places in the world today where just making such a sculpture might get you killed. He created this before women’s liberation, before the modernization of women’s roles in Egyptian life.  But he was not a one issue artist. He wanted free determination for every Egyptian citizen, male or female, Muslim or Christian or Jew or Arab or Nubian. He wanted to remind his own people that once they were the keepers of a library so large and fine that the world’s philosophers considered it the fulfillment of a dream just to visit there and study. He wanted to remind his own brothers and sisters that Egyptians did not merely contribute to Western culture, they may well have invented it.

Two titles, and one is a promise. Renaissance means re-birth. To be born again is to start fresh, to start clean. All things are possible.

Today, right now, this minute in Midan Tahrir, or as CNN calls it, Tahrir Square, Mubarak’s thugs fire on the Egyptian people from the rooftops of the Hilton, and the American University, and the Egyptian Museum, and anywhere else they can find a perch. They hurl Molotov cocktails and light protestors on fire. They race through the streets on horseback throwing blows and firing guns. These are the so-called “pro-Mubarak” protestors who all seem very organized and armed in their nondescript clothing.

And yet as of this writing the people remain. They have not yet been driven down or away. And here in America we wait to see exactly what kind of wrong choice we will make about the Middle East this time. But I can guess because, hey, America does love a duplicitous, murdering bastard.

You may not have heard this about duplicitous, murdering bastards, but turns out they’re just human.

Two titles for this sculpture, and one is a promise. The other, Egypt Awakening? Well that’s a threat. If you want to try to negate that threat, you might try doing something to work for peace. I leave you with Mr. Yeats.

“…somewhere in sands of the desert

A shape with lion body and the head of a man,

A gaze blank and pitiless as the sun,

Is moving its slow thighs, while all about it

The darkness drops again, but now I know

That twenty centuries of stony sleep

Were vexed to nightmare by a rocking cradle,

And what rough beast, its hour come round at last,

Slouches toward Bethlehem to be born.”