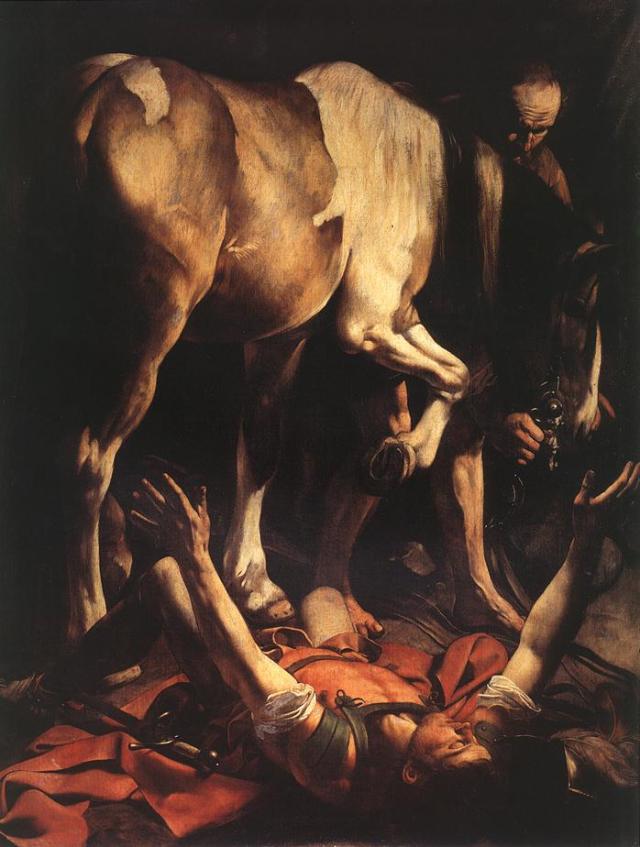 The last several months I have written more than once about artists who pushed our perceptions by redefining the use and impact of light. Caravaggio showed us the value of the dark. As one writer put it, “he put the ‘oscuro’ back in chiaroscuro.” It is a bit of a fraud to say this, of course, for it is still using light for effect, yet  it is the startling and devious use of shadow that distinguished him from those that came before. Chiaroscuro is about contrast, and Caravaggio instinctively knew how to best use that contrast for dramatic effect. They say that the great directors of horror films learned from the masters like Hitchcock and Whale who learned from the masters like Murnau  and Wiene, but it isn’t hard to see that the original makers of dark, dramatic thrillers took their instructions directly from the canvas of Caravaggio.

Caravaggio was lucky to have lived when he did. If ever an artist was ridden by a demon, he was the one. For most of his life he did pretty much whatever he wanted to do when he wanted to do it. It is almost cliche to say that he was not respected or successful during his lifetime, but it simply isn’t true. While he had many commissions rejected over the course of his career they were almost always immediately purchased by someone outside the Church. For the most part, the Church loved his work as did the wealthy and powerful patrons of his day.  Had they not, he’d have spent most of his 39 years behind bars because he was pure biker-badass when he didn’t have a brush in his hand.

Caravaggio painted directly from life unlike his contemporaries who preferred to prepare a series of drawings and studies which were then further idealized when painted. Not him. Because he painted directly from life he was able to work very fast, which was lucky since it helped him pay off his latest fines or finance his escapes to other jurisdictions. This is how good an artist he was: he was a murderous, whoring, drunken, brawling profligate whose scandalous behavior made news up and down the length of Italy throughout his life; who once delivered a painting of the death of Mary, mother of God, to the Carmelites which featured a famous and instantly recognizable local prostitute as the model for Mary (the Carmelites decided to pass).

You have to be very, very good to get away with that. He was.

His eye for dramatic rendering was amazing. In the first painting we see Paul struck to the ground, blinded and terrified, his position made more interesting by the dominance of the looming horse, the man standing behind it, the surrounding darkness as blank as Paul’s vision. Look now tax collector, you are nothing to me anymore, a mere bump in the road for this horse to step over. This is as complete a telling as it is possible to get from a single pose, is it not? 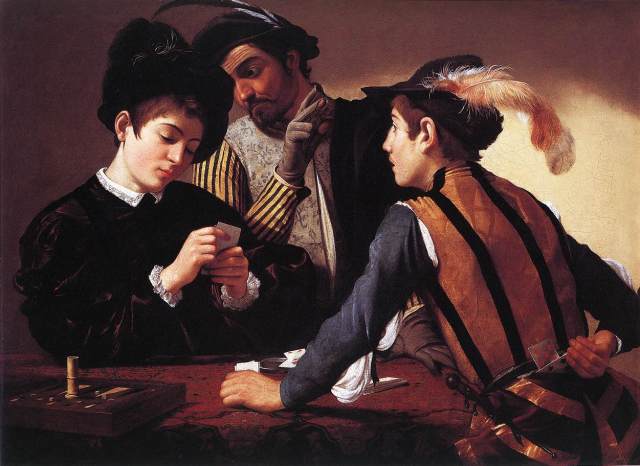 In the second, the Cardsharps, an entire story is told in a glance. Two rogues in league to cheat a young card player. Their flashier duds are the slightest bit ill made compared to the quiet, dark finery of their gulled mark. You can imagine the whole history of all three men in a single moment. (For my local friends, this one is at the Kimbell in Fort Worth and you can see it any time you want for free. That’s right, Cowtown. Free. Amazing.)

Finally in the Taking of Christ we see the darkness swooping in from the right to smother the light, which is Christ suffering the kiss of his betrayer. An apostle flees, crying out to the left of the canvas. To the right is a figure wielding a lamp, Caravaggio himself as the Church trying to illuminate for modern humankind this struggle between God and man, good and evil, and ultimately the frightening implications of Christ’s struggle in Gethsemane, an antinomy in which God seemingly vies against His own plan.

Not bad for a street-fighting man.

When I see some modern Caravaggio wannabe like Charlie Sheen, I just have to laugh remembering that there was a time when it actually took balls to be that kind of a horse’s ass. Nowadays it’s just another way to sell deodorant.