Interlude 5: I Am A Nighthawk

Posted on December 1, 2011 by foxpudding 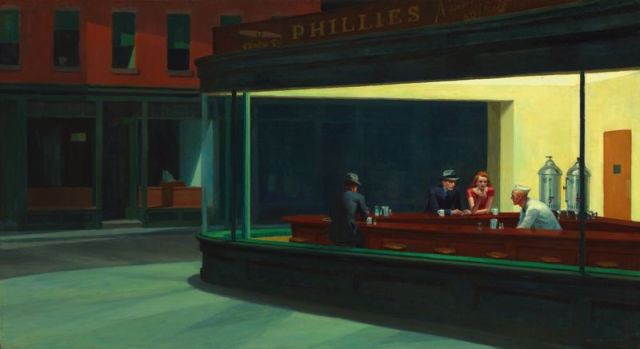 For the past fourteen months, three days, the baby had been nine months old.  A wonderful, cuddly age, nine months: all sweet milk and soft talcum.  A baby knows its parents well by then, especially its mother.  He goos and smiles and waves his little arms reaching for her.  He laughs so hard he loses his breath.  He sits up almost all the time without help and without tipping over.  He experiments with crawling.  He is well into eating baby food.  He grows vocal and inquisitive, aggressively seeking out new adventures.  The baby was all those things, but he was not moving forward.  He was not growing older at all.

Terri’s eyes lit up whenever she talked about the baby, about how wonderful he was, how precious, and how she was the luckiest mother in the world that her baby stayed just the same.  It took all of Daniel’s love and forbearance just to listen to her.  Terri sat at the dinner table bubbling away about her day with the baby, and every word jabbed Daniel like a pin.

“We watched Mr. Rogers together today.  On the dvd.  You know that man was wonderful.  I could swear to you the baby knows it’s him talking.”

She turned and smiled tenderly at the baby who slowly gnawed at a melting vanilla wafer.

“He gets the wackiest grin on his face.  The baby, I mean.  He looked for all the world like a little—“

“—that fat comedian who used to be on Mork and Mindy for a while.  The one from the sixties, you know?”

“Jonathan Winters!  I knew I’d remember it. He looked just like him.”

Daniel stared at his dinner, trying to control himself.  He rarely commented on the things she said about the baby.  It was too hard.  He knew most of the time what he wanted to say, but her focus, her incredible  knack for motherhood seemed to sap him of his arguments.  It hadn’t been that way at first.  He was sure it had been different.  They met and married in mere days.  Sometimes he worried that had been a mistake.  The baby had been nine months old then, too.  Maybe it had been nine months old for years before.  But how could he have known?  A little ready-made family he’d thought.  Her first husband had passed away.  She needed a man.  The baby needed a father.  And he had wanted her.  God, how he had wanted her.

He tried to make himself stay on the point.  “Did you see Doctor Winfield this afternoon?”

Terri paused, her fork hovering over her plate.  “You know, I didn’t.  Now don’t be angry, Daniel.  I just didn’t.”

“Damn it, Terri.”  Daniel’s breath deserted him.  Panic swept over him as it always seemed to do when the subject of the baby came too close to the truth.  But he had to continue.  She had to face facts.  As he struggled to speak his eyes met the baby’s and he imagined he saw a spark there, a hope.  He felt encouraged.  He forced himself onward. “We have to get help,” he finally managed to say, “find out why this is happening. Can’t you see that something is wrong?”  He dropped his fork on his plate with a clatter and pushed it away with a trembling hand.

Terri pouted.  “Don’t be a grumpy Gus.  Everything is fine.  The baby was sleeping so peacefully I just didn’t have the heart to wake him.  Besides, I don’t see the point in going to that doctor anyway.  The man is obviously a lunatic.”

She speared some salad, started to shove it in her mouth, then stopped and pointed to his plate with it instead.  “You eat the rest of that, or I won’t let you have dessert.  It’s apple pie.”  She popped the salad in her mouth and winked at him.

Daniel sighed, looked down into his lap.  He could not confront her.  He pulled his shirt sleeve back from where it came to below his hand.  He scooted on the chair a little bit, confused.  The table seemed so high.  Terri watched him from her chair near the baby.  She seemed to shimmer.

Daniel stuck out his bottom lip, but he scrunched up and pulled the plate back in front of him.  He ate slowly while Terri beamed in a glow of maternal radiance.  As he moved he felt his worries ease; he felt calmed, supported.

“Look at you, so stressed.  Why, you’ve lost so much weight you’re just swimming in that shirt.”

Daniel’s love for her calmed him.  So long as she sat and watched him like that, her love pouring into him like a physical force, he could handle anything.  Everything would be all right or she would kiss it and make it better.  She had that power.

He finished his dinner and smiled at Terri.

“See, now you can enjoy your pie.”  Terry scooted the chair back and picked up their plates.  She carried them off to the sink.  Daniel looked thoughtfully at the baby, dimly aware that something was supposed to be bothering him.  Now what could that be?

Behind him he heard Terri at the sideboard.  “A slice for Mommy and a slice for her big boy, Daniel.  Oh darling, aren’t you happy?”

She placed his dessert before him and touseled his head.  “I’m so lucky.  The best baby ever, that’s what I have.  And you.  It’s almost perfect.”

Daniel felt so nurtured, so complete.  He scooped a big piece of pie on his spoon.

“You know what could make it better?” he said.  “Ice cream!”  He laughed and gobbled it down.

“No, not ice cream,” she whispered, her eyes dark yet gleaming.  “Twins.”

The baby laughed so hard he lost his breath.

This entry was posted in Fine Art, The Automat. Bookmark the permalink.

5 Responses to Interlude 5: I Am A Nighthawk